A Tale Of Two Dads: Turns Out, Only President Obama Can Calm My Son

When President Barack Obama visited Hanoi in May 2016, I was U.S. ambassador to Vietnam. So I had the honor of riding from the airport to the J.W. Marriott in the president’s limousine, affectionately called “The Beast.”  I could tell immediately during our forty-minute ride that President Obama had absorbed all of his briefing papers and much more. He did not need to discuss talking points or the purpose of each meeting. He already knew what he needed to accomplish. Instead he sought a deeper understanding of the broad context in which his visit was taking place. 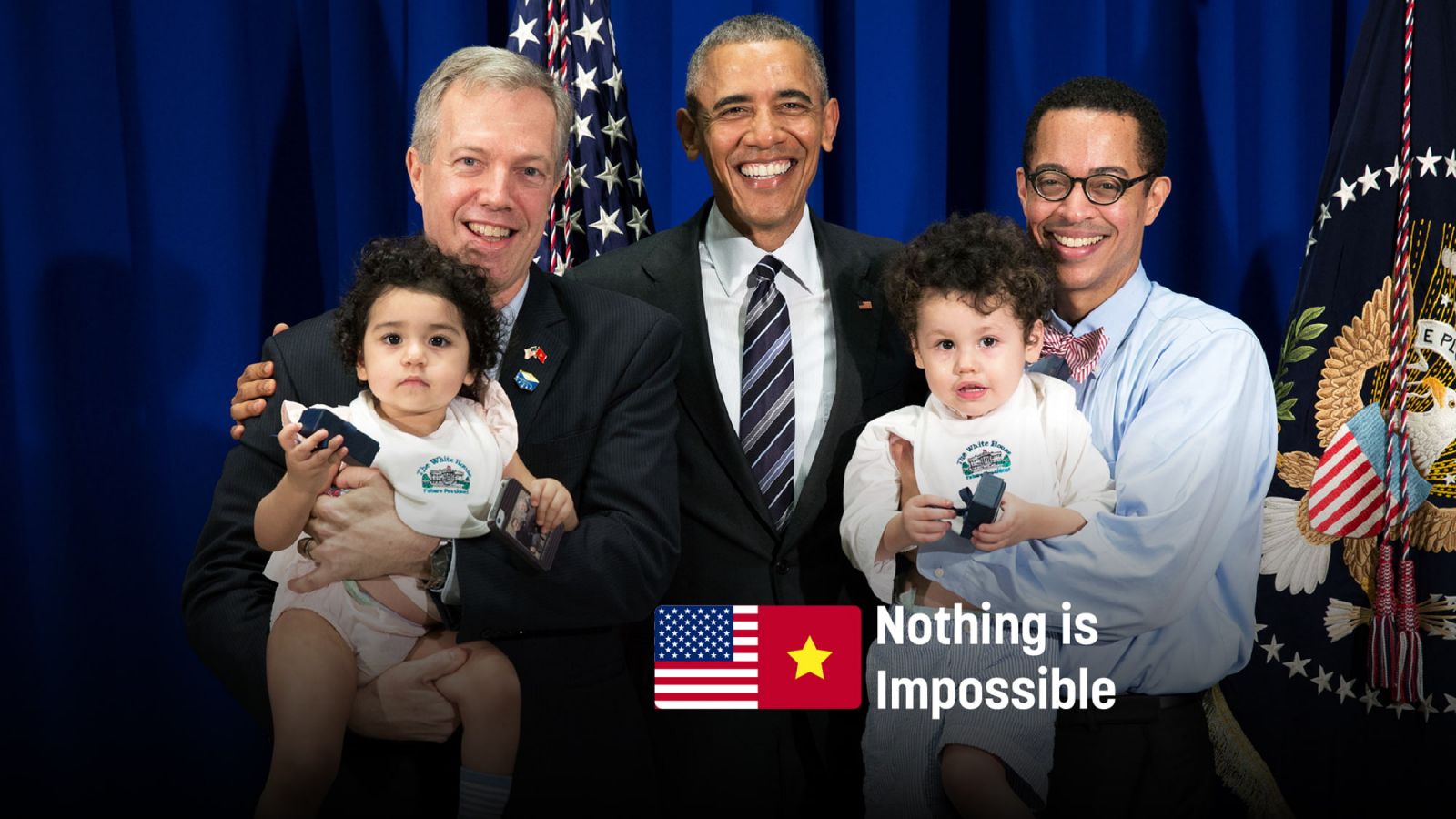 The president asked questions that ranged from “What changes are taking place in Vietnamese society?” to “What is the citizen’s relationship to Vietnamese authorities, especially to the police? What forces drive Vietnam’s rapid urbanization? What motivates Vietnam’s young people?”

I answered each question as thoughtfully as I could, and I was glad I not only had expertise in Vietnam but also in Indonesia, where the president had spent part of his childhood, so that I could draw a few comparisons. President Obama wanted to dig beneath the surface and achieve as much as possible during this three-day trip.

As we neared the hotel, he asked, “Are you here with your family?” He was offering an opening, and I took it. “We’re a typical American family,” I replied. “My husband is black, I’m white, and our children are brown.” The president laughed and said, “You’d make a good Benetton ad.” He asked to meet our family, and Clayton and I were happy to oblige.

Before the president departed for Hồ Chí Minh City on Air Force One, Clayton and I brought our kids to his hotel. We waited with a select few others for our chance to see the president.

The photographers had set up special lights, and the room was hot. Our one- and two-year-old kids weren’t patient, and the moment the president arrived, our son staged a full-on meltdown as only a two-year-old can, thrashing and screaming on the floor. Unfazed, President Obama asked his staff for two gifts, small blue boxes emblazoned with the seal of the president of the United States. When he rattled them (chocolate was inside), our son was transfixed. His tears dried quickly, the president threw his arms around both dads’ shoulders, and the photographer snapped a picture.

In that cherished photo, the wetness of our son’s eyes is barely visible. He has a gentle smile, brought out not by his parents but by the president of the United States.

Later, I asked the president, “How did you do it?”

“I’m the baby whisperer,” he laughed.

I said, “I think being a dad is far harder than being an ambassador.”

The president agreed. “Being a dad is harder than being president. But you’re in a high-maintenance stage right now,” he added. “When the kids get to be six or so, that’s when the sweet spot begins. It lasts until around age twelve, and then it gets harder again.”

A few weeks later, a young man visiting the residence asked if I would take a selfie with him, a common occurrence. Later, he wrote to tell me that he had returned to his conservative, rural home province and shared the photo with his father. When he told his father that I was gay, his father replied, “That’s not possible. The American ambassador could not be gay.”

The young man then showed his father the photo of my family with President Obama. At that moment, the young man wrote, his father began the journey toward acceptance of his own gay son.

Former ambassador Osius to release book on Vietnam, US journey to peace

A book by former U.S. ambassador to Vietnam Ted Osius on the U.S.-Vietnam relationship throughout the last 25 years is expected to be published this October.

'Nothing is Impossible: America's Reconciliation with Vietnam' would depict the journey for Vietnam and the U.S. from war adversaries to important partners, as well as their efforts to mend wartime wounds, said Osius, who was the U.S. ambassador to Vietnam from 2014 to 2017. 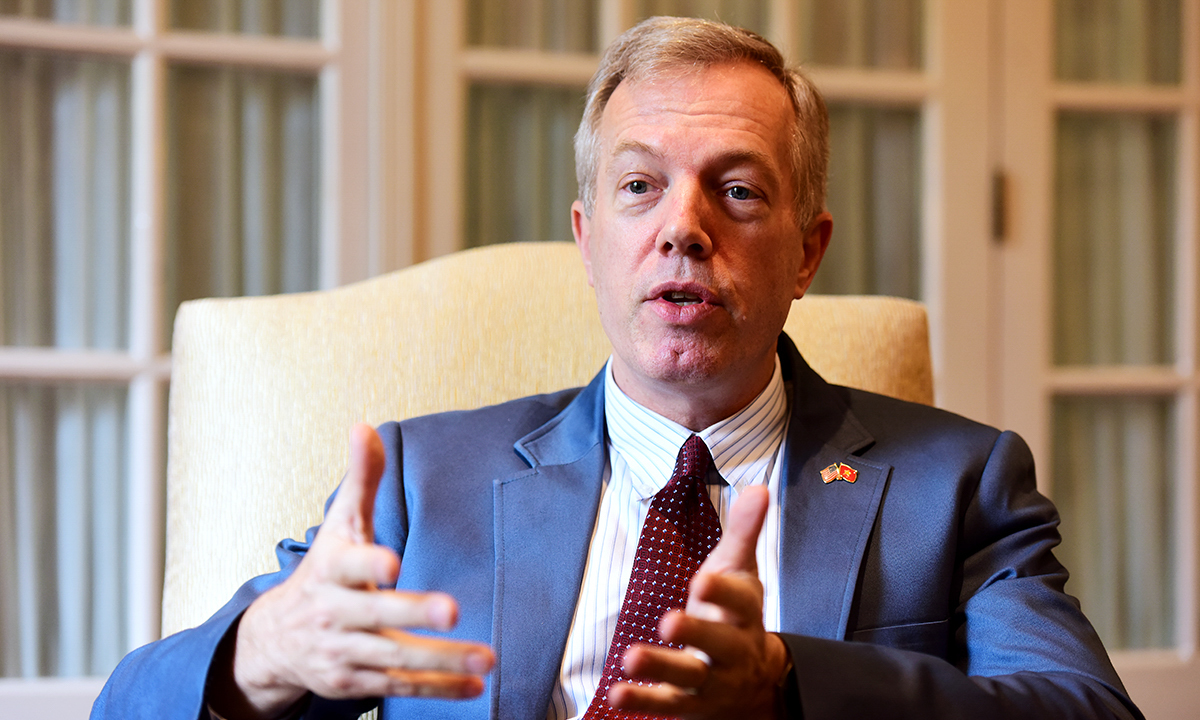 Former U.S. ambassador to Vietnam Ted Osius in an interview with VnExpress in June 2017. Photo by VnExpress/Giang Huy.

Osius said he had directly observed how the U.S. and Vietnam came to reconciliation following the war, including through the stories of major players like late U.S. Senator John McCain, former U.S. Secretary of State John Kerry, former Vietnamese foreign minister Nguyen Co Thach and the first Vietnam ambassador in the U.S. Le Van Bang.

The book also includes the stories of Pete Peterson, who spent seven years in Hoa Lo Prison as a POW before becoming the first U.S. ambassador to Vietnam in 1997. The foreword will be written by John Kerry himself.

Ted Osius was one of the first U.S. diplomats to work in Vietnam after the end of the Vietnam War in 1975. He helped with the establishment of the U.S. consulate in Ho Chi Minh City in 1997, before being nominated by former U.S. President Barack Obama as ambassador to Vietnam in 2014.

Vietnam and the U.S. normalized relations in 1995 as announced by former U.S. President Bill Clinton. As the years passed, the two countries have become comprehensive partners, with bilateral trade increasing from $450 million in 1994 to $77 billion in 2019. For several years, the U.S. has been Vietnam's biggest export market, while Vietnam has been one of the U.S.'s quickest growing export markets.

Trinh v. Vitiello Community Advisory Read this advisory in Vietnamese   What is this case about? This class action lawsuit (Trinh) was filed in February 2018 to challenge the immigration detention of Vietnamese immigrants who were ordered removed but cannot be sent back to Vietnam. The United States and … Continue reading

The New York Times, “The U.S. Ambassador Who Crossed Trump on Immigration,”

ShareAmerica, “Ambassador Ted Osius, U.S. Ambassador to Vietnam, introduces himself to the people of Vietnam,” (18,000 views):https://www.youtube.com/watch?v=FblaZT6xgHQ