I liked and respected Prime Minister Nguyễn Xuân Phúc.  On May 30, 2017, Prime Minister Phúc arrived in the United States, the first stop of a trip whose centerpiece would be a meeting with President Donald Trump at the White House.

But first, in New York’s Intercontinental Barclay hotel, U.S. investors in Vietnam welcomed the Prime Minister and his commercial delegation at a star-studded investor gathering, where incentives and opportunities for doing more business with the United States were highlighted.  Prime Minister Phúc promised that by 2035, thirty percent of Vietnamese citizens would be middle class.  He touted Vietnamese reforms and its upgraded credit ratings and pledged that Vietnam would boost its purchases of U.S. exports.  American investors were impressed.

I accompanied the Prime Minister on his flight from New York to Washington.  He ambled back to my seat on the plane to ask how he could best engage with Donald Trump.  “Be yourself,” I urged him.  “Use visual aids, but don’t rely too heavily on notes.”  Maps would be good, too, I suggested.

In time for Phúc’s visit, U.S. companies had completed more than $8 billion worth of commercial deals, mostly for high-tech products, including almost $6 billion worth of agreements for General Electric.  In Washington, the Prime Minister was joined by Secretary of Commerce Wilbur Ross in a ceremonial signing of the biggest completed deals.  At a dinner hosted by the American Chamber of Commerce, U.S. Trade Representative Robert Lighthizer introduced the Prime Minister by noting that “our trade deficit presents new challenges and shows us that there is considerable potential to improve further our important trade relationship."

Prime Minister Phúc promised that Vietnam was eager to increase trade and investment with the United States. "In terms of trade,” he said, “it is absolutely realizable for us to increase our trade turnover, thus turning the U.S. into Vietnam's largest trading partner and promoting fair and equal bilateral trade relations.”

The next morning, Vice President Mike Pence and I waited outside the Oval Office while President Trump and Prime Minister Phúc met “one-on-one,” with interpreters (and about a hundred television and print journalists).  President Trump noted that the United States has “a major trade deficit with Vietnam, which will hopefully balance out in a short period of time. We expect to be able to do that.” 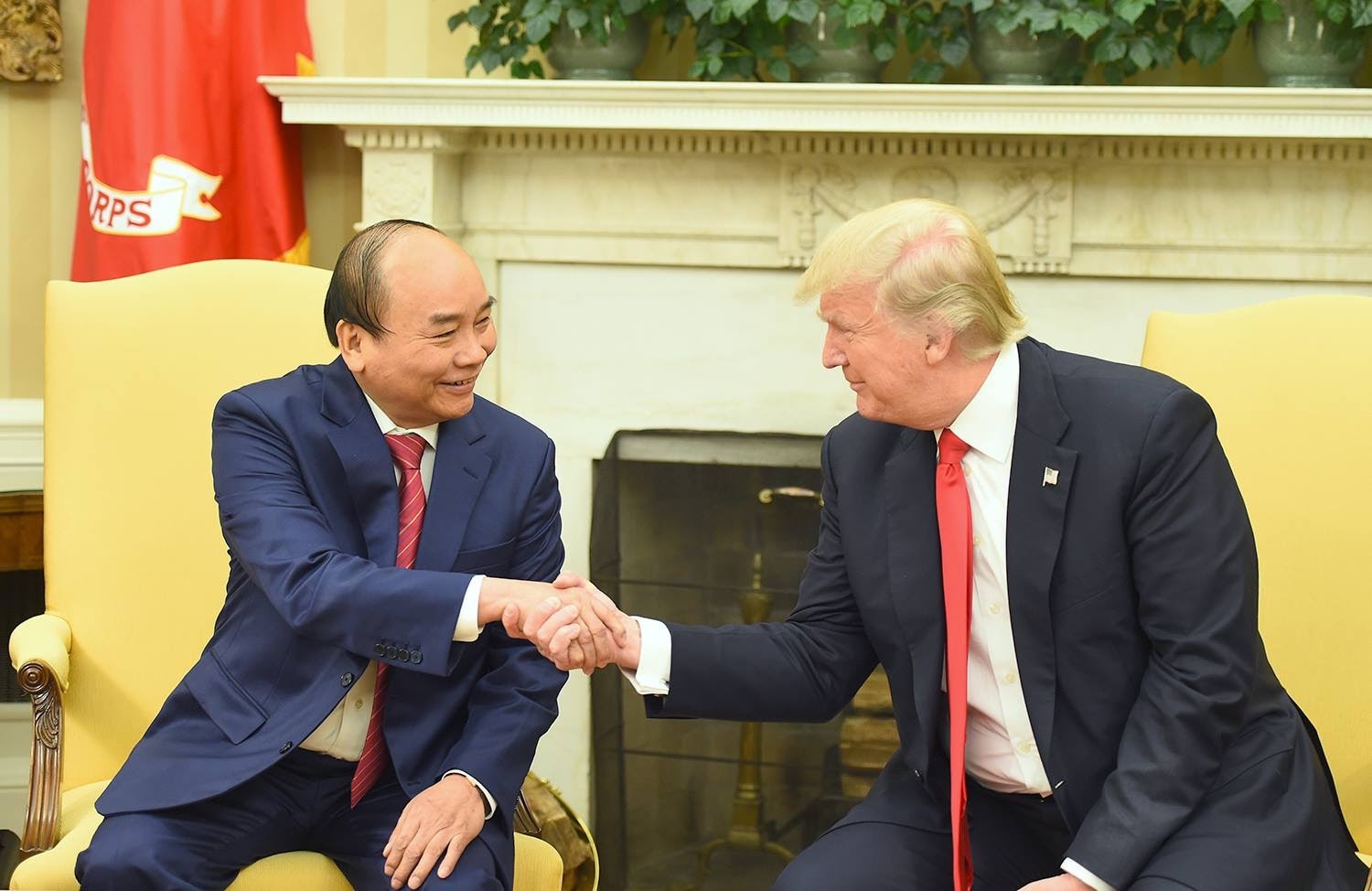 The Prime Minister showed the President a map of the South China Sea as a reminder that China’s behavior concerned Vietnam most of all.

The President and Prime Minister then moved to the Cabinet Room, where the Vice President, several Cabinet members and I joined them.  President Trump again urged Prime Minister Phúc to reduce Vietnam’s trade deficit with the United States from $32 billion to zero in four years.  It was left to the Prime Minister of Communist Vietnam to extol the virtues of free and fair trade, saying trade “leads to growth and jobs.  Our two economies are more complementary than competitive.”

President Trump spoke again about trade deficits and said, “we must make more progress before the APEC summit.”  Trump told Phúc that Saudi Arabia had placed orders worth $450 billion during his recent visit there.  “Jared and Rex worked really hard,” he said.  The message was clear.  In the Trump era, Presidential visits came with a price tag.

When National Security Adviser McMaster suggested that “an aircraft carrier visit would be historic and an important symbol,” the Prime Minister replied carefully that Vietnam “appreciated the initiative to bring an aircraft carrier.  When we have the capability, we’ll receive it.”  He added, “We are not yet in a position to do so.”

Vietnamese leaders needed first to gauge the Chinese reaction before committing to a date. In a joint statement released following the Prime Minister’s White House visit, the Vietnamese agreed only that the two leaders “looked into the possibility of a visit to a Vietnamese port by a United States aircraft carrier.”  In March 2018, when the aircraft carrier USS Carl Vinson pulled up to the coastal city of Đà Nẵng, it was the first port call by a U.S. aircraft carrier since the Vietnam War ended.

From Nothing Is Impossible: America’s Reconciliation with Vietnam, by Ted Osius, to be published October 2021 in English by Rutgers University Press.  If you want to receive further info about the book, please sign up with your email address.