We began preparing for a visit by Secretary of State Madeleine Albright – her first trip to Vietnam – just six weeks after Ambassador Pete Peterson’s May 1997 arrival.  This trip was important in its own right but also because we knew it could be paving the way for a visit by President Bill Clinton. Secretary Albright had personally sworn in Pete as ambassador, recognizing his integrity, ability to overcome tragedy, and steady focus on the future. Pete knew I had served as Madeleine’s staff aide and political officer when she was Ambassador to the United Nations, and he asked me to take responsibility for planning her visit.  I admired Madeleine greatly, and I enjoyed this challenge. Once we had the actual dates, there were only ten days to organize the trip, and I threw myself into every detail.

Madeleine was enchanted by Vietnam, and she enjoyed traveling around the country with Pete. On all of her trips, she tried to carve out a little time for shopping. She knew that Hanoi had a vibrant local art scene, and after official meetings, she and Pete visited a gallery where she admired a painting. Madeleine was not carrying any local currency, but Pete stepped up and said, “I’m the man with the đồng (Vietnamese currency).” This provoked a lot of laughter. 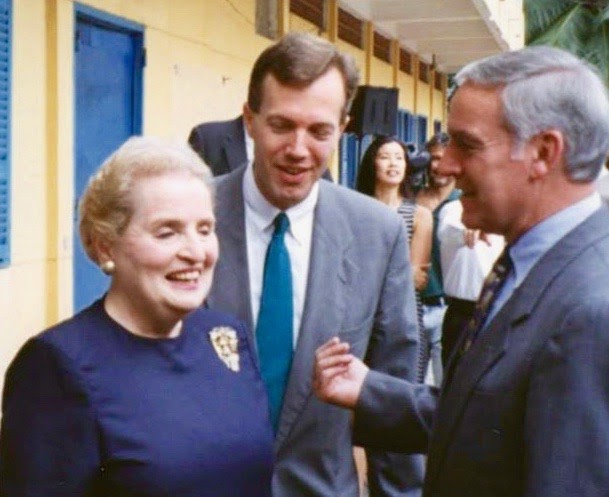 It was fun being with Madeleine again and seeing that she was the same smart and gracious, funny, and charismatic person she was when she served as UN ambassador.  She took time in the middle of a wildly hectic schedule to see me and renew our ties. After a few days in Hanoi, she and her entourage traveled to Hồ Chí Minh City, where we would be opening the U.S. Consulate General. On June 28, 1997, Madeleine symbolically troweled in a brick at the foundation of the new consulate, in the shadow of the embassy from which we fled on April 30, 1975.  Pete stood beside her.

After the event, Madeleine spontaneously walked out of the gate, to the consternation of her security detail, plunging into a crowd of Vietnamese onlookers.  She sparked a flurry of happy excitement and handshakes that perfectly captured the sense that we were moving forward.  For me, this was a moment when my work for an old boss was meeting the work with a new one, two diplomats whom I admired tremendously.  Secretary Albright’s visit enabled us to open the consulate, and I could begin my assignment as the first U.S. political officer in Hồ Chí Minh City in twenty-two years – since the city lost its former name, Saigon.

The Secretary’s visit wasn’t all celebration though.  She met the Communist Party’s eighty-year-old General Secretary, Đỗ Mười, in Independence Palace, once the home of South Vietnam’s presidents.  As note-taker, I appreciated Madeleine’s direct and forthright manner as she pressed the old war leader on his country’s miserable human rights record.  Đỗ Mười wasn’t accustomed to being challenged in this way, but he knew he had to engage with her if Vietnam hoped to have a relationship with the United States.

Madeleine also pressed Prime Minister Võ Văn Kiệt and Foreign Minister Nguyễn Mạnh Cầm to ease emigration curbs so that the U.S. could waive Jackson-Vanik restrictions, legislation that since 1974 precluded the participation of non-market economies in any U.S. government program that provided credit and investment guarantees if the country restricted emigration.  Aimed at the USSR, the restrictions prevented U.S. companies in Vietnam (a non-market economy that restricted emigration until 1997) from having access to government trade support. Madeleine urged these leaders to have the Vietnamese government release political prisoners, and she spoke specifically about Đoàn Viết Hoạt and Nguyễn Đan Quế.  Two years later, both were offered release.  Hoạt and his family agreed to leave Vietnam and went into exile in the United States.

Dr. Quế, on the other hand, refused to leave Vietnam. Vice Minister of Public Security Nguyễn Văn Hưởng was furious and told an interlocutor, “That was the deal.”  Friends urged Dr. Quế’s brother, Dr. Nguyễn Quốc Quân, to persuade his sibling to leave Vietnam.  “If his conscience dictates that he remain in Vietnam, who am I to talk him out of it?” Dr. Quân replied.

From Nothing Is Impossible: America’s Reconciliation with Vietnam, by Ted Osius, to be published October 2021 in English by Rutgers University Press.  If you want to receive further info about the book, please sign up with your email address.