The disputed South China Sea features prominently in the relationship between Vietnam and the United States, and bullying by China of its neighbor helped deepen relations, the former U.S. ambassador to Hanoi has revealed.

“In fact, even in my very first meeting with President Truong Tan Sang when I presented my credentials, we talked about the importance of the South China Sea,” said Ted Osius, who is now president and CEO of the U.S.-ASEAN Business Council, a trade promotion group.

In his new book, “Nothing is Impossible: America’s Reconciliation with Vietnam” (Rutgers University Press, 2021), Osius serves up a vivid first-hand account of the development of Vietnam-U.S. relations in the last quarter century.

In his opinion, the “critical turning point” that made the Hanoi leadership realize that they needed new strategic partners was in May 2014, when China moved a large oil rig to the waters near the Paracel Islands which Vietnam and China both claim in the South China Sea.

The incident led to an unprecedented wave of anti-China protests in Vietnam and was seen by many as one of the most serious developments in long-running territorial disputes between the two countries.

“It alerted Vietnam’s leaders to the fact that China was going to continue a pattern of bullying,” Osius said. Those in Vietnam who were “hesitant to embrace the United States became more open to the possibility of having a close relationship with the United States,” he added.

Since then, military cooperation between Hanoi and Washington has expanded greatly and U.S. Navy has held regular joint activities, including port calls, with Vietnamese partners.

Osius, who was ambassador in Hanoi from 2014-2017, told RFA that his new book is “not a policy book but much more, as I believe reconciliation is about people”.

“So it's a set of stories about people and mainly the people who took great risks and were very brave to turn United States and Vietnam from enemies into friends.”

“And I tell stories about what it was like in the early years when I first went to Vietnam, just after normalization and how welcome I felt in the country then,” he said. 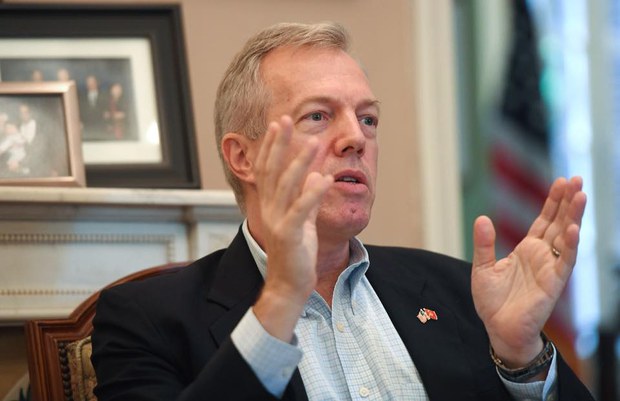 The formal normalization of diplomatic relations between the two countries was only announced in 1995 under President Bill Clinton, 20 years after the end of the Vietnam War. A year before that, in Feb. 1994, the U.S. lifted its decades-old trade embargo on Vietnam.

“I think the transition in our relationship… is quite phenomenal. I call the book ‘Nothing is Impossible’ because Pete Peterson, who was the first U.S. ambassador to Vietnam and a former prisoner of war, on the 20th anniversary of diplomatic relations stood up and said: ‘You know, in U.S.-Vietnam relations, nothing is impossible!’” Osius explained.

When Vice President Kamala Harris visited Hanoi in August, there were talks about upgrading the bilateral relationship to a so-called “strategic partnership,” which Vietnam has with a number of countries deemed very important in terms of security and economic development.

“It just doesn't have that name, and I think that's OK… I actually think there's been a lot of trust that has developed over the years. But leaders of Vietnam are careful as they have to strike a balance - they've got a very powerful neighbor to the north who they have to keep good relations with,” he explained.

In an apparent reference to then President Donald Trump’s decision to withdraw from the Trans-Pacific Partnership (TPP) trade agreement in 2017, Osius said: “I think we made a mistake and actually damaged trust somewhat because many Vietnamese leaders had taken great risks for Vietnam to join that trade agreement, and then we kind of pulled the rug out from under them.”

The veteran diplomat, who served as ambassador under both Obama and Trump, resigned from the foreign service in 2017 after falling out with the Trump administration over a plan to deport thousands of refugees who fled Vietnam after the war.

In his new book, Osius didn’t hide his criticism of Trump, who he described as “untruthful and erratic.”

“President Trump showed no interest, he wasn't even interested in five minutes of briefing” before his meeting with Vietnamese Prime Minister Nguyen Xuan Phuc in May 2017, according to the former ambassador.

“I think it was disrespectful to the Prime Minister of Vietnam. In President Trump's worldview, it's all transaction and it's the worldview of a person who has been involved in real estate deals his whole life and who does not invest in relationships.” 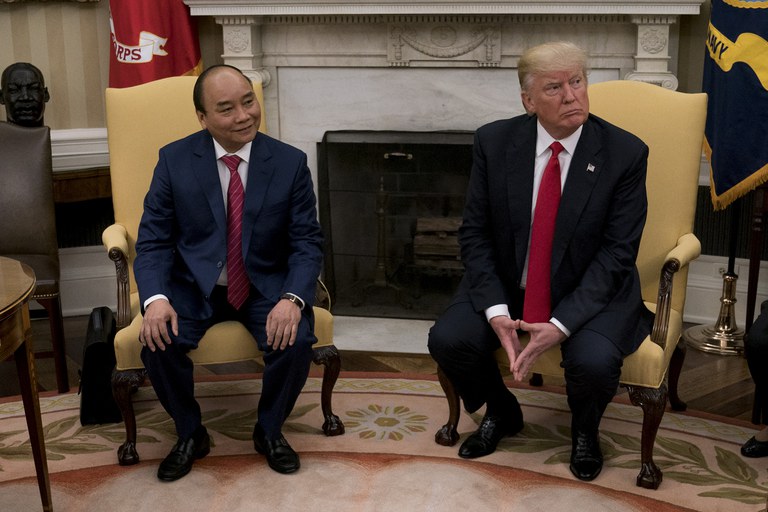 Osius described how Trump made “a ridiculous joke” about the Vietnamese PM Phuc’s name and said nothing could have prepared him for the meeting which was “very, very strange.”

“Diplomacy is about building trust and showing respect, investing in relationships and doing things together - it's not just about money and power. In my view, one president did not understand that.”

Trump’s policies, Osius said, made it difficult to "press the Vietnamese about human rights," which were “the hardest issues that I dealt with as ambassador.”

Vietnam has constantly been criticized for severe restrictions on freedom of expression, religious freedom and civil society. Vice President Kamala Harris said during her recent visit she raised human rights concerns, including the release of imprisoned dissidents in meetings with Vietnamese leaders.

Hanoi always denies that there are political prisoners in the country, saying people are only detained for violating laws.

“I started by being super clear about what we were looking for. I carry in my shirt pocket all the time a little card. It was America’s asks on human rights, and there were names on that card,” said Osius.

“Every six months we would refresh that card with a top list of names, top list of requests.”

Osius admitted he “was never a big fan of exile” when a prisoner of conscience gets released and goes in exile to the United States.

“I don't think that's the solution at all, because those people who are brave enough to speak out on behalf of their nation should stay in Vietnam and continue to work for society to improve,” he said.

Osius said , however, that looking at the long-term changes in Vietnam, “the trajectory is good,” and people have much more freedoms these days than before.

“I think the society will only improve if leaders are able to hear criticism from members of society, to have a free exchange of views and it won't destabilize the country. That's my very strong belief that Vietnam can withstand internal criticism and can come out stronger.”